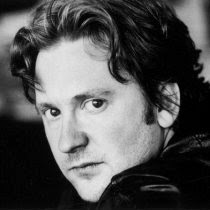 The background.
Paul Farley grew up in Liverpool and studied painting in Chelsea. He’s won (or been shortlisted) for a sack full of prizes including the TS Eliot award. As well as publishing poetry on the page he’s been a big name on the radio waves, broadcasting poetry and drama. Check out a fuller list here.

Why this poet?
Paul was my poetry tutor back in the days when I was a teeny weeny undergrad at Lancaster University. At the time I don’t think I realised just how great a poet he was. We’d go to the pub, he’d recite dirty limericks and tell us horrifying and hilarious stories. His poetry has an awesome musical quality to it which comes through on the page, but hearing it is even better. His book titles remind me of Stereophonics songs for some reason, which is no bad thing: “The Boy from the Chemist is Here to See You” and “Tramp in Flames” for example. His poetic voice is unique and full of charisma, and his poems expertly capture a sense of time and place, tackling difficult issues with a combination of subtlety and flamboyance.

Some similes act like heat shields for re-entry
to reality: a tramp in flames on the floor.
We can say Flame on! to invoke the Human Torch
From the Fantastic Four. We can switch to art

[...]
my uncle said the burning bodies rose
like Draculas from their boxes.
But his layers
burn brightly and the salts locked in his hems
give off the colours of a Roman candle

in the middle of the city he was born in,
and the bin bags melt and fuse him to the pavement
and a pool forms like the way he wet himself
sat on the school floor forty years before,
and then the hand goes up. The hand goes up.

A reading
That same old issue, of course – this is just an extract, albeit about half the poem.

Farley is a master of “turning the line”, which is to say that the lines shift meaning depending on how you read them. Any line in his poems stands well on its own, but then look what happens when you read the line before it, or the one after: it changes subtly but significantly. Let’s look at an example...

Some similes act like heat shields for re-entry
to reality: a tramp in flames on the floor.
We can say Flame on! to invoke the Human Torch

Taken on its own “to reality: a tramp in flames on the floor.” hits hard. The narrator instructs us of the reality of a man burning in the streets. It’s almost dismissive; this person is “a tramp”, somehow not a human or fully formed character. We learn nothing of him until the end, only his title of “tramp”.

Now attach the first line to it ("Some similes act like heat shields for re-entry to reality: a tramp in flames on the floor.") Suddenly we’re in a kind of literary outer space in which similes protect us from the reality of a burning man. It’s completely true, think about how we talk about death. We rarely say, “I’m sorry x person is dead.” We say “he’s passed on”, “he’s no longer with us”. It’s a simile for death but we use it to soften the blow, as a heat shield against the fire of reality, which is too hot to handle.

And then join the last line to the second (to reality: a tramp in flames on the floor. We can say Flame on! to invoke the Human Torch). It’s a cruel joke, isn’t it? The narrator suddenly moves away from reality, perhaps because they can’t take the image, and they turn it into a bit of a joke by comparing the man to the Human Torch from Marvel comic books.

What is it saying then? We placate ourselves and ignore the cruel reality of what is happening. Later the poem refers to “the city he was born in” and the tramp’s life at school when he’s (we assume) asking for help: “and then the hand goes up. The hand goes up.” Even here, Farley’s challenging how we read the line. “The hand goes up” in class to ask for help, and he stresses it again (The hand goes up.) to show the LACK of help. Is this poem really about someone burning? Well, it could have happened or simply be imagined. But it seems to be suggesting that we, as individuals and a society, find reasons to ignore social inequalities and those who need help, not only when they’re adults but also throughout their lives. Choosing ignorance is what causes the problem, the burning.

This is only my take on the poem, of course, but I strongly encourage anyone to take a look at this poem for themselves. “Turning the line” (I’ve just made that up by the way, I’m sure it has a proper name) is something Farley is a master of, but his poems have such a powerful voice that frequently capture time and location so brilliantly. Reading him is a masterclass in impactful and thoughtful verse.