Got no friends? Bored with life? Turn off the oven! Put down the pills! There are many wonderful poetry events you can be a part of, full of (potentially) interesting people and (potentially) free booze. Sounds like heaven? Well it (potentially) is!

Here are a few upcoming poetry readings going on, which just so happen to include me on their rosters... 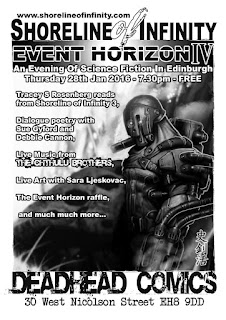 Event Horizon: January 28th, Deadhead Comics (7:30pm)
Okay I'm not really reading at this one, but I organize and host it. It's a great night of sci-fi performances, and this time around it includes: 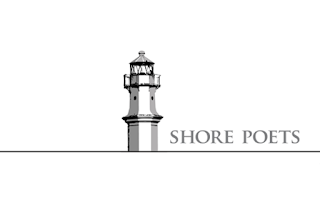 Shore Poets Quiet Slam: January 31st, Outhouse (7pm)
This is a bit like a poetry slam, but without all the yelping and whooping. Poets are judged on the quality of their poem and their delivery, with no marks for audience reaction. I'll be reading something suitably morose. Come watch me lose! 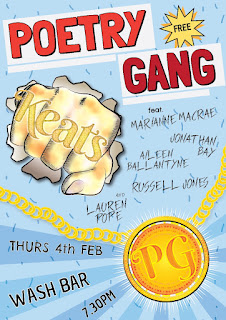 Poetry Gang: Words from Reekie: 4th February, Wash Bar (7:30pm)
Meet the most happenin' hip hop quinet around. With topics ranging from candyfloss to crack, unicorns to unicef. Each poet involved is a current or past PhD Creative Writing candidate at The University of Edinburgh, and they is street, innit. Includes readings from Marianne MacRae, Jonathan Bay, Aileen Ballantyne, Lauren Pope and me. There may also be a guest appearance from a real life mobster. (There won't be.) 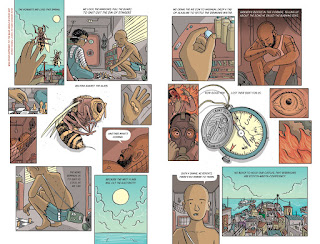 Rally & Broad - Ampersand Edition: 19th February, Bongo Club (7pm)
I'll be performing live with the horribly talented Atzi Muramatsu. He'll be responding to my sci-fi comic poem (drawn by the ever impressive Edward Ross), with musical improvisations. It's a night of collaborations which ought to get the veins pumping.


That's all for now, but we're worried about you. Come out once in a while, have a shower, wear clothes... 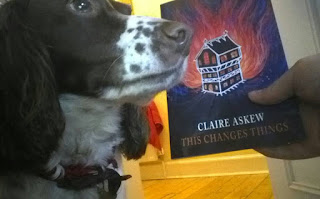 
I’m nervous when I read my friends’ books. Sometimes, I’m so off-put that they end up sitting in a pile, pleading to me. The problem is this: what if I don’t like it? Then I have to see them, avoid the topic, try to swerve conversations in not-your-book directions, maybe even test out my poker face if they ask directly, “So what did you think?” It’s with a gram or two of that trepidation that I approached This Changes Things by Claire Askew. Well, here’s my review in a monkey nut: What a debut!

This is a book of (literally) two halves, with the first section covering memory and family tragedy (amongst other things) and the latter taking on the narrator’s (we have to say that) adult life of moving house, finding love, holidaying and so on. The book also rugby tackles a variety of important issues such as checking-ones-privilege, our irrational pre-judgements of women and the unadorned, unappreciated luxuries of living and life. It has an obsession with death, but none of these issues are treated flippantly, none of them seem trodden or familiar. Askew doesn’t let you escape judgement but she also includes herself in those prosecutions, so it feels like her fingers are pointed in all directions.

That’s a sandpaper glimpse into some of the topics of the book, but of course the proof of the pudding is in the expression, and Askew is as about as original and vibrant as you can get. As a writer myself, I’m (usually unwillingly) trying to pick up on ‘how’ a writer manages to achieve success (by which I mean, a punch in the face) in their writing. There are several notable components and techniques to Askew’s style which make her writing identifiably hers (you KNOW an Askew poem when you read it). Firstly, she is brilliant at turning a line on its noggin’. Check out these cuttings from “Fire Comes”:

... Beyond the helpless trees somewhere, a dog rattles awake;
the air brake
of a distant night bus seethes. Fire slides its tongue into the house’s
ear

Askew builds the line to a particular expectation, then shifts it in an instant. When we first read “the air brake” we envision a sudden change in the atmosphere which, associated to the waking of the dog (which is achieved through the rhyme, and thus conscious and subliminal linking of “awake/brake” in our minds). This brake then transforms to the mechanical air brake of a bus, evoking a familiar (to me, soothing, but also potentially sinister) hissing sound in the mind’s ear. Similarly, the image of a burning house becomes eroticised (frankly, to my mind, in a somewhat grotesque way) when the image gains an “ear”.

The effect of this technique (it’s not unique to Askew of course, but she employs it regularly, and triumphantly) is to surprise the reader, undermining expectation to bring multiplicity of meaning and image.

Askew creates other surprises through her rhythm and rhyme. None of the poems in This Changes Things feels clunky; rather, they have a natural music which carries you through. This is particularly important because the collection is narrative-heavy (not a criticism, rather an observation). Without the music of her language, poetic narratives can feel laborious or flat. Success is more complex than it seems and it’s a great testament to Askew’s inner musician that she’s been so successful in keeping the engine chugging so virulently. Her use of rhyme is particularly impressive, simultaneously keeping beat and arousing those linguistic surprises I mentioned earlier. Here’s a section from “Wakefield”:

you’re hitching up your negligee
to flash the trains.

Wakefield, the ultimate lousy lay –
mutton-dressed catastrophe, shoving your hands
down the jeans of strangers in doorways

As you might have guessed, this poem isn’t the most subtle verse of the collection, but its energy and subversive humour make for a welcomed intermission between more serious pieces. It’s easy to see how Askew’s rhyme produces a rhythmical tango, with half and full rhymes strewn like a string of flickering fairy lights. However, the full effect is to create unexpected connections between those rhyming words: “negligee / lay / catastrophe / doorway(s)”. It is this twist on expectation which breathes life into the poems, forcing the reader to sit up and pay attention.

Okay, sorry – I got a bit technical there, but I think it’s interested to understand how a poet achieves their effects, because it’s those effects in particular which raise the poems from the ground. This Changes Things made me repeatedly curse, “Damn, I wish I’d written that.” Askew’s poems are brimming with crackling lines which sound newborn, and the poems don’t shy away from relevant, modern and important topics. The orchards and hills of Askew’s are never simply beautiful, never trapped in antiquity or nostalgia; they are fragile, fat, dead, contemporary, complex. This is what modern poetry ought to be aiming for.

This Changes Things is a wonderful debut collection, full of charisma, venom and vavoom. It’s teeming with heartbreak, comedy, damnation and brilliance which I will be returning to time and again. Buy it, buy it now.


I’m so relieved I can look Claire in the eyes.