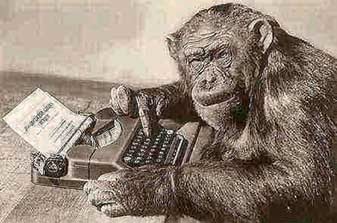 This is a post about writing, and that mystical art of “process”. Essentially it's a bunch of blog posts from various writers – known and unknown – about why they do what they do, and how it is they go about doing it. It's not a book of hints on “how to be a writer” or a set of tricks to get you motivated, so far as I can tell, but a glimpse inside the private lives of the freaks and geeks amongst us, those people who sit on their lonesome and scribble down what the voices in their heads tell them to say...

I received this calling to write a post on “the writing process” from Pippa Goldschmidt, and as the tradition dictates I shall now tell you a little about her:

Pippa is a professional astronomer, which to me makes her incredibly cool before she's even opened her mouth or put pen to paper. She is also the author of The Falling Sky, a novel which has received great acclaim and which I ignorantly still need to read. But I do know this: it's about a female astronomer whose discovery could unravel current understandings of The Big Bang. She is also a fine poet and I included her work in Where Rockets Burn Through:Contemporary Science Fiction Poems from the UK. If you've an interest in science and fiction then she's a definite go-to contemporary writer. Go, go check out her work and ramblings, go now! You can check out her site here, which includes her own post about the way she goes about getting the good words down and chucking the bad ones out.

And so the nebula has been passed on to me. The task is to answer four questions, so here we go...

Question 1: What am I working on?

Back in January I was rowing in Ha Long Bay, in northern Vietnam. A guide told me that on occasion, if you were lucky, monkeys could be seen climbing and chatting among the rocks. Now, I love monkeys. I love them a degree further than is probably sane. I've visited a monkey temple in India, fed a baby monkey in Thailand, I even have a t-shirt proclaiming my monkey love. And yet no monkeys appeared on those rocks. Imagine, if you can, my despair. I longed for those monkeys to voyage down, if only I could call to them in a voice they could understand, they would surely not deny me the pleasure of their company...

That's the long route to saying this: I'm writing a novel about families who can communicate with animals.

I'm also still writing poetry and will shortly be editing my upcoming collection The Green Dress Whose Girl is Sleeping (due for publication with Freight Books in 2015) with editor Andrew Philip.

Question 2: How does my work differ from others of its genre?

I'm perhaps most well known for my work in the sub-genre of Science Fiction Poetry, having published two pamphlets of my own (“The Last Refuge” from Forest Publications in 2009, and “Spaces of Their Own” from Stewed Rhubarb Press in 2013) and edited a book of contemporary sci-fi poems from the UK (“Where Rockets Burn Through” from Penned in the Margins, 2013). The science fictional element seems to have the ability to draw in new audiences, primarily fans of SF, which I am very happy about because it gets non-poetry-readers a bit more interested in poetry, as well as breaking apart some of the snobbishness of poetry and genre.

So far as the novel goes, it's a young adult book (of which there be many) but aside from the story line I've been trying to challenge notions of gender, race and class by inverting them. It's also a book about politics and power, which are subjects I think we tend to – incorrectly – shy away from when giving books to young people. It will include lots of monkeys.

Question 3: Why do I write what I do?

This is a question my mum would ask me. In terms of poetry, I write to distill my thoughts and to see what language can do, how it can change my perception. I think there's something almost scientific about poetry, it's a process of discovery, of experimentation, of refining and refracting, and re-examining the results. What comes out isn't necessarily what went in, the conclusion isn't necessarily the aim. And that's good because it bends the box and slaps you around the face a bit.

My novel feels more like an escape, a world I'd like to visit (although probably not live in). It's a chance to explore my characters and see who they become, as arsey and artsy as that sounds. Perhaps they're imaginary friends; I want to help them out, to lead them down uncertain paths and see what's on the other side.

In all honesty there's a financial element to novel writing too. Poetry is a labour of love, I know I'll never make my fortune from it. More people are willing to pick up a novel and to pay for it.

Question 4: How does your writing process work?

A poem starts as a line in my head, I hear it first like a piece of music from a broken record that wants me to place the needle back on the groove. The poem grows from that line, I don't know what it is when I start it and it's not always clear by the end. Sometimes I am interested in the poem as an experiment. Hey what would happen if I wrote a bunch of one word poems, or a sequence of sonnets about sexbots? Sometimes it feels like more of an expulsion, to sweat something out and jar it. A nice jar of sweat. I try not to force out or overwork a poem, rather I just let them come as they will, sometimes a dozen in a day, other times nothing for months. I almost always work on a laptop: the appearance of the poem is very important to me and if I need to scratch things out with pen and paper its messiness would disturb me and throw me off the scent. Editing can take anywhere from minutes to months. In 2008 I started a poem that is just 25 words long, and I'm still not happy with it. That said, once I feel a poem is finished I don't like to touch it after about 5 years. That feels like I'm editing my old self, trying to pretend they didn't exist or that somehow the person I am now is a “better” poet, with more worthwhile things to say. And that seems very rude to Old-Me.

Writing a novel feels more planned out. Probably because I use a somewhat extensive plan. I know where things start, their potential endings, but not necessarily the finer details in between. The characters react and change, they think things over and respond. I can't plan that part of things because I don't know the characters well enough until they're faced with the dilemma, the romance, the massive murderous bear with platinum claws that chases after them. Redrafting prose is currently an enigma to me, although I imagine it will be copious.

If you've managed to get this far then well done! All that's left is to introduce the next writer, Colin McGuire. Colin has published a pamphlet of poems about sleep, "Everybody Lie Down and No One Gets Hurt" with Red Squirrel Press, and is well known around the Scottish spoken word scene. He has reached the finals of the BBC Poetry Slam and runs a regular poetry night in Edinburgh, called Talking Heids. He can be followed on his blog, here! A full length collection of Colin's work is due out this year.

Peace and monkeys be with you.
Posted by Russell Jones at 04:19