A poetry book review: Locust and Marlin by JL Williams 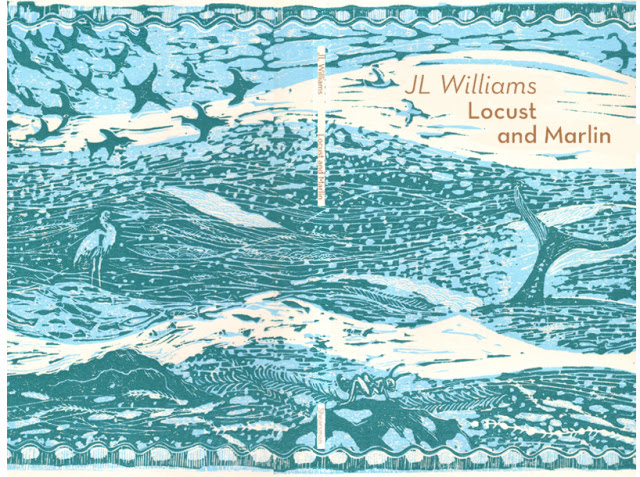 Our position in the world, and how we reflect on it, is one of the key concerns of this book. This seemed apt to me as I sat in the sunny March of Holyrood Park in Edinburgh, my dog panting at my side, Locust and Marlin getting grubbied by my mud slathered hands. It was a fine setting for reading this book (surrounded by volcanic hills, the hum of the city in the background, people walking to work) in which nature, god and our place in the universe are pondered. There is something quite transformative about reading a collection of poems in a relevant space, and the near-miracle of a Scottish sun made it all the sweeter.

If Williams reads this review then she may laugh at what I'm about to say, because when I bought the book at the Scottish Poetry Library I obsessed over this: the cover feels great. It's a peculiar thing to mention in a book review but the front and back of Locust and Marlin has a velvety finish that makes it pleasurable to hold. The cover image – a sea blue menagerie with hidden images of insects, birds and fish – also rings of the natural imagery and mythology to be found within the poems. Shearsman have done a fine job in creating an artefact worth holding, for sure.

But what of the poems themselves? There's a refreshing brevity to Williams' work, splashes of life and colour that aren't afraid to let themselves stop ahead of schedule. These are glimpses, ruminations, reflections. They avoid answers, and I admire that in a poem. A quiet confidence permeates the collection, in which the poet taps us on the shoulder to ask what we're doing. There are longer pieces too, some of which were amongst my favourites as they begin to dig up the earth a little more.

You could dip in and out of this book and take something from each of the verses. The opening poem, for example, “Heron”, is a short meditation on the nature of the imagination, and a fine beginning to a collection that requires us to fill in the gaps it leaves behind. I would like to show the poem in full, but it's not the done thing, so here are the first four lines (of seven):

Imagine a great silence
whose wings touch no branches.

Imagine a space demarcated
by lack of sound.

Cleverly, this heron is returned to in the final poem, “Revelation”, which is only three lines long, ending: “the feeling of the fishes brushing his legs”. The revelation is the acceptance of being, of nescience, of its position in the world; a revelation which perhaps we share by the end of the book. There's that biblical reference too, of course, and this is a frequently visited home in the collection. The narrators don't always quite know what to do with god, or the notion of it. In “Like Phaeton (3)” for example, the “He” of the poem remains ambiguous, its repetition almost mimicking laughter:

He does not speak
as others do.

God isn't here to stake out dry tongues,
to lay claim to scorched fields of hay.

This difference is by no means a criticism of the approaches taken to such a demanding topic, in fact a reduction of god, or an understanding of it, to absolutes, would be to undermine the complexity of it. As a reader with an innate aversion to religiousness in poetry, I was paranoid that this frequent reference would irk or bore me, but that was thankfully avoided. Williams considers the personal, theological and psychological aspects of her core concepts to keep them refreshing. Although they don't all hit the same notes, I was particularly enamoured by the peculiar, sometimes even grotesque language in poems like “Son”, in lines such as “The wind is a cow” and “I can imagine how my lungs smell”. The anatomist in me likes that.

But this isn't to say that the collection is without flaws. As the cover images imply, there are a lot of seas, birds, fish and stones in this book. I'd say the majority of the poems mention them at some point, and whilst book-long tropes can be impressive, they did blur into one another at times and I found myself thinking “oh bloody hell not another stone”. This could have jarred the pleasurable experience of reading the book as a whole, even though it did at times make chimes and tinkles between the poems. And whilst the book asks questions, it asks too many of them, and too overtly. It's full of rhetoric-isms, and although this does lend itself to the nature of questioning our spiritual and actual place in the world, the combined effect is to dampen the concern of each (however well meant or interesting they might be). The most successful poems present these ideas without firing them – shotgun like – at us. These large concepts need to be drawn out of the poem through the reader's interpretation, and in poems such as “Blinding” (perhaps my favourite of them all) this is achieved succinctly and powerfully. The closing lines read:

The pleasure of Locust and Marlin is most profoundly felt on reading it as a whole. Its tone is inviting, gentle, reassuring in its subliminal declaration that there are no real answers, and that we must each find our place amongst the questions. As good poetry ought to, this book made me leave that sunny park a little different to when I arrived, and though I washed the mud from my hands when I got home I've still got some of it under my nails.
Posted by Russell Jones at 03:49