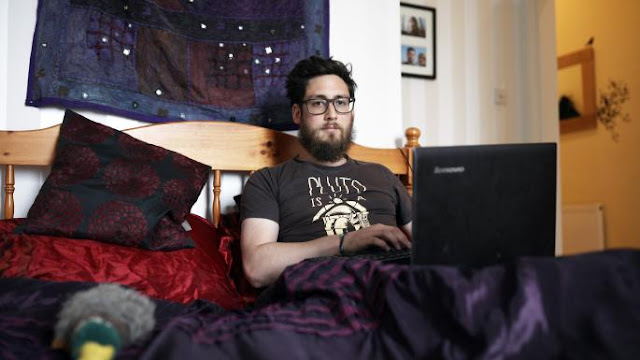 read the full article online in The Times

Hear ye, hear ye! I've an interview in The Times (4 July 2016), about my novel (The Talkers) being shortlisted for the Half the World Global Literati Award. It's a full page, with a snap of me in bed. Here's the interview, from the pen of the brilliant Mike Wade.

An author whose unpublished manuscript has been turned down by at least a dozen agents has been nominated for a book prize.

The Talkers by Russell Jones, a novel for young adults, did not seem to appeal to the British literary establishment. A panel of judges in America took a rather different view and shortlisted it for the $50,000 (£37,600) Half the World Global Literati Award.

The Edinburgh-based writer has another feather in his cap. As the title of the prize implies, it aims to reward books that “give a voice to the inner lives of women”. Men are rare among the shortlisted writers.

Fortunately Jones is “a strong feminist” as his writing, apparently, makes clear. His girlfriend, who works for a charity helping women who have suffered violence, encouraged him to enter the competition.

The novel is a sci-fi fantasy following Chris, a highly intelligent but emotionally tangled girl of 15, as she seeks her parents’ killers in a world ruled by “Talkers” – powerful individuals who can psychically control animals.

According to the citation, the depiction of the matriarchal world is a means of “critiquing the gender inequality that exists without our societies.” The narrative is told in the third person “telling Chris’s story from an outside view”, said the author.

“We do slip into her mind. I didn’t really find it a challenge, to be honest. Essentially, I just wrote a character I liked, wanted to talk about and follow. The gender elements were outside her. It was just a question of writing a good character. She happens to be a 15-year-old girl.”

Jones, 32, worked for eight years as a teacher and as a teaching assistant in Wester Hailes, a tough housing scheme in southwest Edinburgh. “I guess I have an affinity with young people,” he said.

He now earns the bulk of his living over three or four hours a day by helping to write commercial websites. The rest of the time he makes from what might be called a comfortable living from literature: he writes prose and poetry from his bed, at home in a flat near Meadowbank, Edinburgh.

Jones recently had a book of poems published and is editing a forthcoming collection of Edinburgh poems and prose. He is also deputy editor of Scotland’s only sci-fi magazine, Shoreline of Infinity, and says that he has the plot of another sci-fi novel in his head.

What is the appeal of sci-fi? “It is a genre which breaks boundaries and allows us to project current concerns into the future, or to take them to an extreme and see what happens,” Jones said. “It is about lack of restrictions.”

Half the World Holdings was established this year on International Women’s Day as an investment platform devoted to women’s interests. The literary award was a response to research showing that recent prize-winning books rarely had a woman “at the heart of the story”.

Entries can be screenplays, novels or short stories, but must be unpublished. The public can read the shortlisted works if they sign into the awards website.

As well as the first prize, there is an audience award of $1000 for the most popular new work. The Talkers was in second place in the public vote yesterday.

“The fact I’m on the shortlist and near the top of the public vote is probably good for me,” said Jones. “Maybe an agent will notice.”