In a bid to share my poetry preferences and spread the good word about some fine poets, living and dead, I have decided to publish a fortnightly Poet Profile. 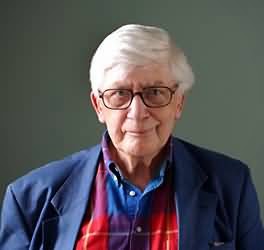 The background.
For anyone who knows me, this guy’s the obvious choice to begin my poet profiles (my PhD was on his sci-fi poetry). Edwin Morgan (1920-2010) was the Scots Makar until his death in 2010. He grew up in Glasgow, serving abroad in WW2, returning to teach at Glasgow University. For all the ins, outs and sideways of his life I’d recommend picking up “Beyond The Last Dragon:A Life of Edwin Morgan” by his great friend and biographer, James McGonigal.

Why this poet?
Morgan has to be one of the most exciting poets I’ve ever read. His poetry is diverse, funny and profound. He’s written poems about the Loch Ness Monster, Computer Christmas cards, space aliens, love, loss and liberty. He’s written sonnets, sound poems, colour poems, sci-fi poems, dialogue poems, concrete poems, one word poems, emergent poems... I could go on. In short: check him out.

A reading.
First, I have to express how much fun this poem is to read aloud. You’d be missing out (and partly missing the point) if you just read it in your head. Having taught this at secondary schools and universities, I know how much of a kick people get out of hearing it spoken with gusto. Give it a try, go on, now!

This is a sound poem, but the shape also adds to possible interpretations we might make. At first the poem looks like nonsense, but there are hints of intelligence in there. The monster asks questions, seeming to call out dinosaur-esque names: “Hovoplodok – doplodovok – plovodokot-doplodokosh?”

Now Morgan has discussed what’s “happening” in the poem, but to some degree that is irrelevant. The poem encourages you to make up your own stories, to build a narrative from mere sound. Take that idea  a step further and it starts to question the nature of language: isn’t the way we engage with the world also linguistically bound? And isn’t language simply an assortment of noises?

What’s the point then? Communication. Something ethereal is communicated through listening to the poem, whether it’s merely humour or something deeper. But the listener also begins to try to translate the poem. “What is the monster saying? What’s happening?” They become an active participant, decrypting the song and taking from it what they will. This was a major drive of Morgan’s work: communication is key, we need to work hard at understanding each other.

This is a great example, I think, of how a poem can work without the meaning of the words being the most important thing on the page. It shows us how poetry can be effective and affective without “understanding” ever being a part of the equation.

Go read...
Morgan has published SO many poems in books, magazines and so on. If you’re new to his work I highly recommend his Collected Poems, which gives a good sample of a wide range of his stuff. You can also listen to a few of his poems on the Poetry Archive. If he grabs your fancy, visit the Scottish PoetryLibrary in Edinburgh, the home of The Edwin Morgan Archive.