The mathematics of poetry publishing success 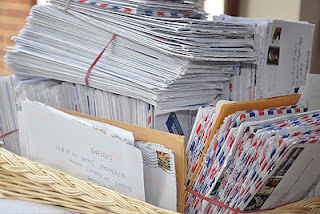 Okay so the title of this post is pretty click-baity, but I do come to that at the end. More accurately, perhaps, this post should be called: "How often should you send out your poems for publication?" because the two are - unsurprisingly - very closely linked.

I’m going to try to answer this question my examining my own submissions over the last year. It starts off a bit mathsy, but I hope you make it through to the analysis later, and my points / learnings at the end…

In 2017 I sent out 164 poems to 33 different magazines/books. 23 poems were accepted in 20 publications. That makes a hit rate of around 14% (per poem sent) and 60% per publication approached. It means that most took a poem from me, and a few took 2.

I also submitted pamphlet manuscripts to 8 different publishers, including a few competitions. I had 4 pamphlets looking for homes, and sometimes submitted more than one to each publisher. In total I sent my pamphlets out 28 times. 3 of the pamphlets found some success (one pamphlet was accepted, one has been provisionally accepted, one more is currently in a short list).  4 publishers are yet to respond. Per submission (28 total), that’s a hit rate of 11%. Per publisher approached (8) that’s a hit rate of 38%.

I would consider this a very good hit rate, personally, particularly "per publication" (60%) rather than “per poem” (but 14% isn’t bad). Based on the number of pamphlet publishers I approached (8), it’s an incredible hit rate (38% positive, 12% definite acceptance) which I’d never expected.

Let’s not discuss full manuscripts because I want to keep those cards closer to my chest.

What was my process?

Well, I keep good records of where I sent each poem, when, and whether it’s successful. This means I can make sure I don’t send them same rejected poems again next time. If a publisher says, “nearly, but not quite – please send us some again” then I make a special note of them.

I was selective about the places I approached and what they might want, particularly if they had a theme. I targeted a number of publications I've wanted my poems to appear in for some time (in some cases I’ve been submitting to them unsuccessfully for about a decade!). Magazine successes included Magma, Atrium, Antiphon and Ink Sweat & Tears.

It’s worth noting that my stats might be a little off because I’m also, on occasion, approached to write poems for commissions. So, those are pretty much automatically accepted, rather than me submitting them.

It’s also worth noting that my submissions included about 15 competitions which cost me around £260, and only one poem was shortlisted, with no prize money in return. This is a really poor hit rate (let’s be generous and call it 7% but you could also call it 0%), and in retrospect I should have entered fewer competitions, and only submitted poems which I felt were “competition winners” (that’s another blog-post for another time).

Now that almost all the poems have been returned with rejections or acceptances, it's about time for another round of submissions. I’m sure this all sounds big-headed, but I'm trying to be factual and honest for the sake of understanding a successful approach or where I’ve gone wrong. My points/learnings are these:

1) Poems /poets get a lot of rejections. Therefore, expect to send out a lot to get a little back
2) Keep the poems out there, if they're half decent they'll find a home somewhere, you just need to be persistent. Keep accurate records so you don’t repeat submissions and you can monitor your progress
3) Be more selective about paid competitions. Though it's hard to judge what will do well, the entry fees can add up (and poets tend not to be rolling in cash)

Something of an aside, but I do not submit to magazines and books which expect a submission fee. I don’t think this is a good practice, but if you have the money then it’s up to you (I understand it can support publications, but paying to be read seems wrong as a writer, to me).


And that’s about it! Go forth, and multiply!