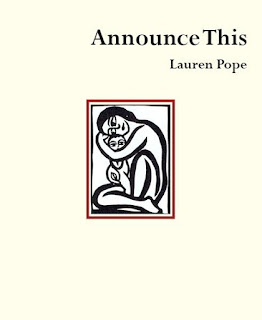 Before the review starts, a confession (of sorts): I know Lauren Pope well. We have met practically every week for several years to talk about poems and restaurants and babies and everything else which isn’t poems and restaurants and babies. We, on occasion, lunch. So of course I’m very unlikely to trash her book (I simply wouldn’t review it). Anyway, in short: I’m definitely biased, but this book is superb.

The book as ‘object’ is worth noting here. Templar Poetry have done a fine job, producing an attractive, minimalist cover which captures some of the poems’ concerns and considerations, whilst also retaining an artistic ambiguity. The book is also square-shaped, which might seem a flippant thing to appreciate, but it means that it looks and feels different in your hand. The poems have more space to stretch their legs and – I’m sure all poets will appreciate this – the wider page means none of Pope’s lines are cut off early or spilling onto the next line. Also, the book has flaps. If you don’t love flaps on a book, you’re insane.

Announce This isn’t Pope’s first collection but it’s a new landmark for an incredibly talented poet. There are multiple themes and philosophies explored, from sex to family, the creative power of mistakes, and the world-shaping potential of language. Such topics could easily become worn, but Pope approaches them with a sharp knife and an unclogged ear. One of the great powers of this collection is its ability to synchronise conflicting tones and concepts. Where there is lust, there is danger. Where there is love, there is longing and pain. Where there is cephalopod ink, there is a healing crystal and a hippy. I was particularly struck and surprised by the exoticness of Announce This – not only in its scenes (it’s something of a globetrot) but in its engagement with varying languages and lingos. As good poetry ought, it makes the familiar feel new, and the new feel unsettlingly familiar:

For me, this is an example of Pope at her best. Each successive line challenges the previous one, retaining and evolving as they progress. “the first rain” (outdoors) becomes relocated by “dessert” (we assume, in a home or restaurant), which also retains a visual and aural echo of “desert”. The effect is double: a shrinking or domesticating, but also an expansion to the wider world, whilst also suggesting nourishment (the desert is nourished by the rain, the speaker is nourished by the food). Similarly, we take “Milky Way” at face value as our galaxy, imagining the breaking down of time and space, only for it to be reduced to a chocolate bar melting in its wrapper. Either reading ‘works’ to capture the grandiose in the minute, everyday observation. They balance, but they also unsettle the other, and the reader. I appreciate any poem which can turn a chocolate bar into a philosophic exploration.

“Unsettling” is a word which I think captures a lot about Announce This. It doesn’t rest on its proverbial laurels. The poems constantly surprise, turning corners to unexpected arenas. Individually, the poems sing and stun, but as a whole it feels like a journey. There’s a narrative thread running through the book, beginning with poems which (to me at least) seem to capture the verve and mythologizing qualities of ancient Greek poetry within a modern context:

I turn my head to better view our landscape. Gold grass hills
have beached around Vinci, and my mind goes to my hair –

bleached into brittle strands of straw, and obsession with light perhaps.
Still, like a niggle or a sting from a fire ant,

all I can think is that I don’t like the way you’re holding that fig,
the way that it unsettles the moment, and others to come

I love that unexpected swerve from gold grass hills, hair and ants, into the possibility of a fig altering life; the movement from unsettled beauty, to its impact on human existence. We are, after all, built by our obsessions and observations – once we see the fig, we are forever changed.

Early in the book, several family-themed and memory-based poems hold their emotional weight without becoming saccharine, sentimental, moany or preachy. Pope’s work tends to leave itself relatively open ended, rather than pushing a particular message. It’s an approach which, as a reader, I appreciate. It doesn’t undermine our intelligence, it asks us to listen and ponder in order to ascertain our own meaning. The narrative holds this together without overstating its place. It continues to unwind as the poems explore sexuality, at times with an underlying sense of aggression or dissatisfaction, at others through pleasure. I’ll just leave this here without comment:

though every time you yell
‘Out vile jelly! Where is thy lustre now?’
and pierce me with your sword,
I hope you know my eyes are rolling.

These poems function with deceptive ease, often conversational but with hidden depths and music which encourage reading, rereading and rerereading to fully appreciate. One of the most linguistically condense poems is also a sestina so well constructed and well realised that I hadn’t noticed the form until the end of the poem, despite its very unusual and specific repetitions. It begins:

Kebab shop, bric-a-brac stalls: she loops
between lapis-hued clothing lines, through
courtyards with fountains, trespasses riads
hunting out carved initials – any sign she lived there
during the comatose years when westerners
crossed the Strait to smoke and fuck.

around my neck. At nightfall, we move west
past the withered stork nests on the walls of riads.
The clap clap clap of men fucking on loop.

The poems' successes are not only linguistic, then, but in parts formal too. The majority of the poems are freeform, but the poet’s meticulous attention to the structure and implication of each word and line is always evident. Reader, you are in safe hands (although they might slap you about a bit).

The last portion of the collection hovers around adult relationships and pregnancy. One of the most affecting poems, “Miscarriage”, deals with trauma and grief, but also the fruitful potential of mistakes, nescience and ‘lacking’:

Announce this: today,
the colour of failure
in the robin’s
sanguine throat.

These combined, combative tensions are a standout feature of the poems in Announce This, and an integral part of Pope’s writing more generally (if I were to typify her work or pick up on a Pope-ism). The collection title (taken from “Miscarriage”) might first be considered celebratory, but it also captures grief, anger and hope which is finally born in “Metamorphosis”:

There’s a certain hint of fated determinism to Announce This, tracing the impact of images, events and lives on the speaker and – in turn – the reader. Are we really able to escape or control our own destinies? This is a question which sat with me after reading the book again. And Pope, quite rightly in my opinion, doesn’t offer answers.

Announce This is a spectacular collection of poetry, full of nuance and gut-punches, blending philosophy with the Everyday in an approachable, enjoyable and expertly crafted book with innumerable layers. Read it. Reread it. Rereread it.