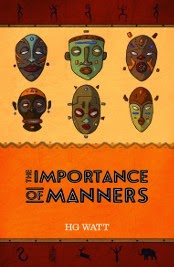 We all know that poets spend most of their time alone, sobbing in the darkness. Sometimes they read poems too, whilst not begging people to take notice of them and their genius. On occasion, during particularly troubled times, they also read novels and other things like cereal boxes and shampoo instructions.

With that in mind (and because I occasionally write and read prose), here's a book review of something known, in the non-poetry world, as a Fiction Book. Enjoy it, you filthy mongrels. And dry up those tears, they're wetting up the place!

The short: 4 helpless, xenophobic cruise passengers embark on a misadventure when their African tour goes off-piste. This novel is full of sharp insight into the way we all perceive the world and other people, with awkward laughs aplenty.

The long: What happens when a zealous nun, a hand model, a pompous toff and a man who hears a voice in his head, go on a cruise? Well, for a start: they don’t hold back, and they don’t get on. But at least they’re trying to be polite about it.

H.G. Watt’s “The Importance of Manners” explores the inner and outer worlds of four pretty unlikable characters as they move from luxury cruise liner, to dodgy canoe rides and snake infested pits in a pseudo-Conrad-esque Africa.

This is a quick read, but with surprising depth. Each character feels explored, and whilst their behaviour and monologues are sometimes extreme or shocking, they also ring true of the way that humans are quick to judge different cultures, not quite realising their own peculiarities. In tight confines, a simple meal turns into a cultural and racial espionage:

“’Who are you?’ Percy asked, thoroughly annoyed. He hated the very American tradition of bothering people during a meal. Even if he had been enjoying his food, the vulgar interruption by the yellowish-skinned waiter had definitely ruined it for him.”

If you find that offensive, you ain’t seen nothin’ yet.

The novel functions cleverly, switching between the various perspectives of the passengers as they fumble through events, with an omnipotent (and self-referential) narrator at the helm. There are literary allusions here too, though I’ll leave you to collect them for yourselves. We are made aware of the construct of the novel – as artefact rather than reality – and this effectually softens the blow of the various xenophobic, racist or otherwise-inappropriate responses of the passengers, as though Watt is laughing along with us, nudging us with her elbow, winking and whispering, “Hey, this isn’t real by the way.”

The switching of perspectives (whilst also seeing what ‘really’ happens from the narrator) also serves another purpose: it questions the nature of truth and perception. If I was chained to a radiator and forced to answer the question, “What is this book about?” I’d probably say: “The way we make our own realities” and then wet my pants. It would be too simple to look at “The Importance of Manners” on the surface alone, its verbose, pompous characters and xenophobic overtones. Beneath all that is a serious message about the way we treat other people and the way we interpret the world. Each of us is full of perceptual bias, some of it racist (like it or not), and Watt isn’t afraid to show us that.

This is a relatively quick read, partly because the book isn’t a long one but also because Watt’s language is fluid and approachable. Its depth comes from the presentation and exploration of its ideas. That isn’t to say the book is without its own poetry:

“THE END IS NIGH

It wasn’t just ridiculous, it was a lie. The end wasn’t coming, it had arrived a long time ago. And the people who still walked the earth? They were all just clinging to the edge of the toilet bowl, like a particularly sticky s**t while the deluge fought to wash them away.”

Yes, there’s poetry in swearing and poo, I don’t care what you say.


“The Importance of Manners” encourages you to challenge your own pre-conceptions, pointing out the hypocrisy of us all. It’s also funny, and that’s not to be underestimated. A roar of a novel, with something serious to say. Go read it, now, you f***ing idiot. Love you long time, from Whitie.